HomeWhat We’re DoingRacial Justice
A- A A+

Building a Coalition for an Anti-Racist Glendale

We have continued to build upon the momentum of June 2020’s historic march and vigil to center Black lives in Glendale. In late June, we convened a group of committed community members, activists, educators, students, parents and faith leaders to discuss next steps in our work to address systemic racism and inequities in our community. The result was the formation of the Coalition for an Anti-Racist Glendale, a community collective dedicated to creating a more just and equitable Glendale by 2027 by advancing systemic change in five key areas: housing, employment, education, justice and health.

The Coalition determined that a critical and key starting point for our work would be the passage of a formal City resolution to acknowledge and apologize for Glendale’s documented history as a sundown town. Historical documents, public accounts and newspaper articles demonstrate that Glendale was a sundown town for a majority of the 20th century, in which Black workers were asked to leave the City by sundown or face violence by police or community members, were excluded from residing or purchasing property in Glendale through discriminatory language in property deeds and covenants, and were made to feel unsafe due to the presence of the Ku Klux Klan and the American Nazi Party who maintained active chapters and headquarters in Glendale.
Racial segregation in America has had serious consequences for the well being of our country. Every sundown town must be asked to do three things to overcome its past: acknowledge its history; apologize for it; and atone for the past by committing to concrete actions to repair and remedy the injustices of its past. Making progress toward racial justice requires confronting the history of racial injustice. On September 15th, the Glendale City Council was presented with the report: Acknowledgement of the City of Glendale’s Historical Contributions to Racism. Councilmembers took the historic step of acknowledging Glendale’s history of racism and its capacity to be a more just and equitable city by adopting the Sundown Town Resolution, making it the third former sundown town in the U.S. to do so, and the first in California.

From January 18th-February 7th 2021, YWCA Glendale will launch its first 21 Day Racial Equity and Social Justice Challenge, designed to help people better understand how racial inequity and social injustice impacts our community. The challenge provides participants with daily tasks via email that include activities such as reading an article, listening to a podcast, and reflecting on personal experiences. By addressing issues of race, power, privilege, and leadership we can connect with others to identify ways to dismantle racism and other forms of discrimination. The Challenge will be offered once a year and the content of each day’s activities will be housed on the Challenge website so individuals can participate at any time.

YWCA Glendale has been called upon by our community to process this historical moment of centering Black lives in the nationwide call for justice and an end to police brutality and racial inequality. Thank you for joining us on June 7th at Glendale City Hall for a Candlelight Vigil to honor the lives of Black women and men whose lives have been lost to police brutality and racist acts of violence and to commit ourselves to the urgent work of eliminating racism. Thank you to the youth leaders who organized the March for Black Lives: Gabrielle Scott, Natalie Kinlow and Ava Garcia and thank you to the vigil organizers: Tara Peterson, Tanita Fadyeyola-Ligons, Tasha Jenkins, Rebeca Andrade, Elen Asatryan, Kate Eberle, Ingrid Gunnell, Malcolm Johnson, Jennie Quinones Skinner, and Ardy Kassakhian.

You can read more about the event and view event photos here.

A Statement from Tara Peterson, YWCA Glendale CEO on the Murder of George Floyd and the Pathway to Healing and Reconciliation

June 1, 2020 Words do not capture the immeasurable pain of this last week. We witnessed the brutal murder of George Floyd by a police officer in Minneapolis, while three other officers looked away and witnesses cried for help and an end to the brutality.  And we lost over 100,000 lives in our country to COVID-19, with a disproportionate percentage of deaths in the African American community.

The YWCA Glendale joins with over 200 YWCAs across the country, united to answer the cry for justice, peace, and dignity for all.  We will continue to call for dismantling systemic racism and equal protection and opportunity under the law through our education and advocacy work.

We invite you to be a part of this work – our work as a community and the work that is required of us all, as individuals. We are at a turning point. We must ask ourselves,  how do we want to emerge from this moment? What is our vision for a more equitable society? How do we build bridges? Can we sit with the discomfort of this moment so we can open our hearts and our minds to the deep and historical pain of communities who have been brutalized for so long? Do we have the courage to hold those in power accountable for their wrongs? How do we foster empathy and connection? Will we continue to look away from injustice? What does it mean to be an ally at this moment? How will we create welcoming spaces and opportunities to heal?

The great Angela Davis once said, in a racist society, it is not enough to be non-racist, we must commit to be anti-racist. I’m asking Glendale to make that commitment. We are here to do this difficult work with you. This is our moment to step into our leadership and our collective humanity to create a Glendale where every member is valued and has the opportunity to thrive. Now is our time to dedicate ourselves to the work of eliminating racism.

Promoting equal protection and equal opportunity for people of color

YWCA’s commitment to racial justice and civil rights runs deep. Since the 1800s, Black and Native women have been providing leadership in YWCA’s movement and, because of the leadership of women of color, in 1946 YWCA began working for integration throughout the organization, adopting an “interracial charter” that established that “wherever there is injustice on the basis of race, whether in the community, the nation, or the world, our protest must be clear and our labor for its removal, vigorous, and steady.” That work culminated in the creation of YWCA’s One Imperative in 1970: To thrust our collective power towards the elimination of racism, wherever it exists, by any means necessary.

YWCA’s approach to racial justice goes beyond changing hearts and minds. We strive to transform communities, systems and public policies and through our annual Stand Against Racism campaign.

At YWCA Glendale the health and safety of our members and community are our top priority. In light of the COVID-19 public health crisis, YWCA Glendale has made the difficult decision to cancel our annual Stand Against Racism Roundtable event, originally scheduled for April 28, 2020 and shift the entire week of Stand Against Racism campaign activities to online and social media activities and actions. As a trusted community leader, we play a key role in educating our community about the intersection of racial and health inequities and this year’s campaign will focus on these critical issues. We cannot not allow the fears surrounding COVID-19 to serve as a vehicle for racism or xenophobia. We invite you to join with us to fight discrimination and stigma by taking a virtual #standagainstracism with our online, social media campaign, April 20th – 26th.

April 30, 2019 – Stand Against Racism event at YWCA Glendale. The event provided safe and non-judgmental space for honest, reflective conversation with members of the community, including faith leaders from Glendale, Hollywood and Inglewood, and Los Angeles neighborhood council members from the foothills communities.The evening began with networking with local residents with opportunities for them to publicly join our pledge to Stand Against Racism.

We then transitioned into the program by having a “fishbowl” discussion with our speakers. Fr. Vazken Movsesian of the Western Diocese of the Armenian Church, Rev. Sherri James of UP Church, Rev. Todd Leonard of Glendale City Church, Shant Sahakian of the Glendale Unified School District Board of Education, and Dannielle Johnson, CEO, of Donut Socialite. The conversation touched on topics such as Glendale’s racial history as “Sundown” town, fostering racial and ethnic unity in our schools, racial reconciliation and healing, and how to create racial and ethnic unity. 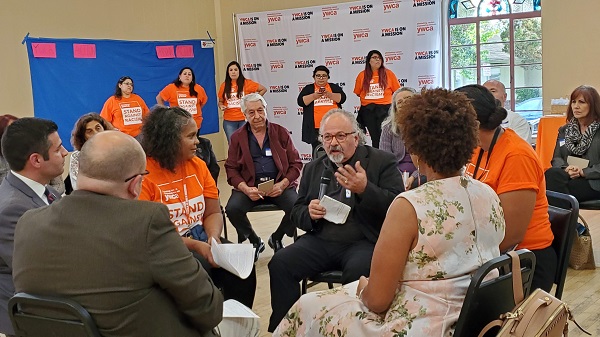 In the second part of the evening, participants were invited to join in on the conversation to reflect and talk about the difficult issues–all in the spirit that we are all fellow journeyers. As such, we also reminded ourselves, though it’s hard to remember sometimes, that we are more similar than we are different. Through this exercise we discussed how individual and institutional racism impacts us all, but we also explored ways to promote greater appreciation of racial and ethnic unity, and respect for diversity. 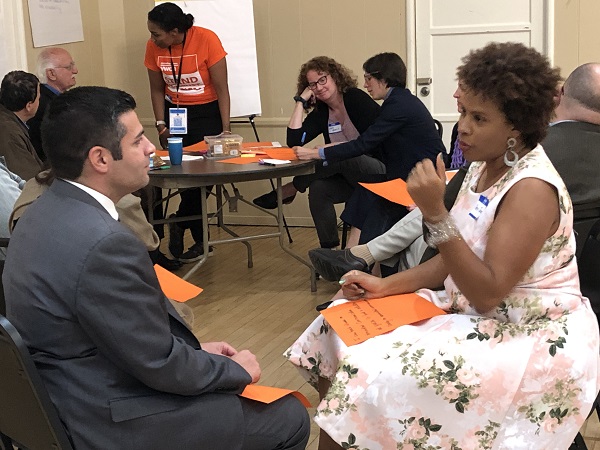 Lastly, participants were asked to place on the wall their personal actions and actions they’d like to see YWCA take–in order to reaffirm our collective and individual commitments to #StandAgainstRacism.